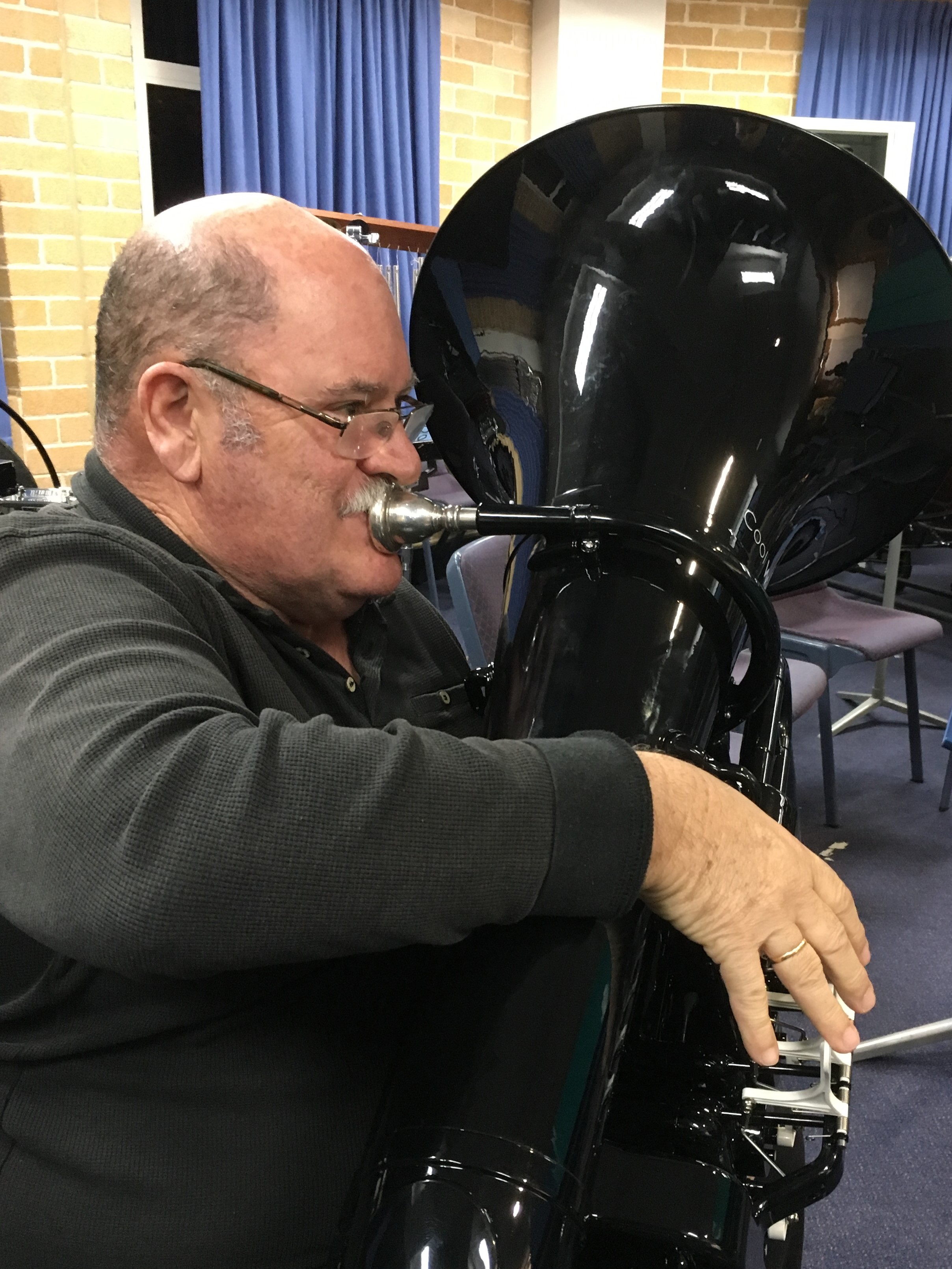 John Tesoriero, affectionately known as Tess, was one of the founding members of the Waverley Municipal Band, (later changed to Waverley Bondi Beach Band and now Bondi Brass). Tess is our BB Tuba player and the band’s Property Manager. He is a tireless worker for the Festival, arranging transport and the delivery of any extra percussion we require. His dulcet tones can be heard in the Clancy foyer as he updates Festival patrons regarding the progress of events.

Tessie’s wife, Barb, and their daughter, Carla, also help out at the ticket office during the Festival making it a real family affair.

Photo: Tess with his new plastic Tuba which is both lighter and louder!

What instrument do you play?

I play the BB Tuba, the tuba was chosen by a teacher at Waverley College, as I was a big fellow so he said I needed a big instrument. I was 12 years old when I started playing the tuba.

What did you do in your ‘real job’?

I started work at State Rail as a junior clerk and was there for 40 years. Prior to retiring in 2004, I was Manager Accounts Payable. At one stage I used to travel all over the state with tens of thousands of dollars for the payroll, back in the day when everyone was paid in cash. As you can imagine, everyone loved it when I showed up in town. They were good times.

What’s one thing about you that might surprise other members of the band?

My faith is very important to me and a lot of my fellow band members may be surprised to know that I teach scripture and do presentations to members of 3 parishes.

Also, back in 1972 I won the Intermediate State Heavyweight title in Weightlifting

What’s your earliest memory of music?

My uncle playing the piano accordion when I was three, but my parents we not that musical. It was not until I joined the band at school that they know I was really interested in music and from then on they were very supportive.

What’s your proudest moment in music?

I have a lot of moments that I am proud of, but to put in a nutshell, when I got to play alongside of Cliff Goodchild when I was asked to play with the SSO on one occasion.

What’s the funniest/craziest moment you’ve ever had in music?

Dressing up as hippies for Waratah parade & Mumbah festival. It’s been a while since I’ve had hair like that!

What is the most challenging thing about playing music?

These days it’s carrying my instrument. Also, trying to keep players interested in the band so more can turn up for rehearsals & gigs.

What music do you love listening to?

I love all music, but Big Bands are my preferred. I loved the Daly-Wilson Big Band and I like Michael Buble. I love going to the SBF’s Frank Coughlan Premier Big Band Event and watching those talented players from the best of the best.

If you could bring one musician back from the dead, who would it be and why?

Ricky May. He was one of the great showman back in the day.

Besides your current instrument what’s the one other instrument you would really love to have learnt? Tenor Sax. (Editor’s Note: We’re glad he didn’t!)

What’s your earliest memory of the SBF and how has the event changed in the time you have been involved?

I first performed in the Festival in 1963, when I was at school (Waverley College). I have been involved as a volunteer ever since the Waverley Band took it over from the Band Association up until now. I had a break of 10 years, between 1990 to 2000.

What do you most like about the SBF/why do you volunteer at the SBF?

Seeing the smiles on the faces of children having achieved a performance in front of an audience. Also seeing children coming to the Festival as primary school aged and watching them come back each year to finally perform as young adults in secondary school.

I have also seen players come to the Festival as children and then watched them come back later with their own bands as Music Directors. That is the reason I volunteer, to see music live on.

If you won the lottery what would you do?

Keep a little for myself and divide the rest to family, friends and the church.

What would you last meal consist of?

Just the usual Name, dates & where I was born. Nothing fancy.

What advice would you give to the young musicians here today’s Festival?

When you leave school, do not give up playing music, find a group and continue playing. You’ll never regret it.